richard 18 Comments on The perfect sourdough

For some time it has been our mission here at the Castle Yumblog to create the perfect sourdough loaf – a subtle alchemy of simple and ancient ingredients – flour – water – salt – animated into being by wild airborne yeasts, and sculpted into final form by that most primitive of the elemental forces, fire (gas mark 9). A breathing entity with a soft chewy sour centre and brittle crusty exterior. A thing of beauty. A joy to behold. There have been many failures along the way – stillborns, dullards, freaks, dribbling atrocities and occasionally an abomination of such hideous visage it wouldn’t have looked out of place in a frock at the Young Conservatives’ summer ball.

However, one moonless stormy night (last Saturday afternoon) we finally perfected our technique and brought into being a loaf of such profound beauty and character that we sank to our knees and praised the gods. Look if you dare at the photo below and behold beauty enbreadified, a redefinition of art, the zenith of human achievement.

Here’s the good news, not only is this recipe fool proof and delicious, it also doesn’t require any kneading. Also for this recipe (and this recipe only) we’ll be dispensing with proper grown up measurements and using the usually derided American Cup. Don’t worry if you don’t have an officially sanctioned and calibrated US Cup as we’re more concerned with proportions than exact quantities here. As a rough guide a US Cup is as near as damn it the same volume as a small British mug – you know, the tall, thin, delicate kind you only dig out when your mum comes to visit. If such casual and wanton disregard of accuracy causes you anxiety, the exact quantity of flour/water/air held by the us cup is 127g.

As so onto the process. Ideally (but not essentially) remove your starter from the fridge an hour or two before commencing in order to get it up to room temperature and allow the yeasts to wake up and have a good stretch.

Find yourself a large bowl and pour/slop in one cup’s worth of your starter.

Next add 3 cups of strong white flour (or whichever flour or combination of flours you choose to use), followed by one cup of (tap) water and 2tsp of salt.

Thoroughly mix everything together, first with a wooden spoon and then with your hands. Although sticky, the dough should form a lump which comes away from the side of the bowl.

Cover with cling film and set aside somewhere warmish for between 8 and 12 hours.

By the time you return to your dough it should have formed bubbles and roughly doubled in size.

Tip out onto a very well floured surface and (thinking of it as a rough square) gently fold an edge into the centre. Repeat with the other 3 ‘edges’. Repeat this process 3 or 4 times by which time you should have formed a rustic loaf shape with a sort of jagged top (this is what splits and forms the crowning crust). 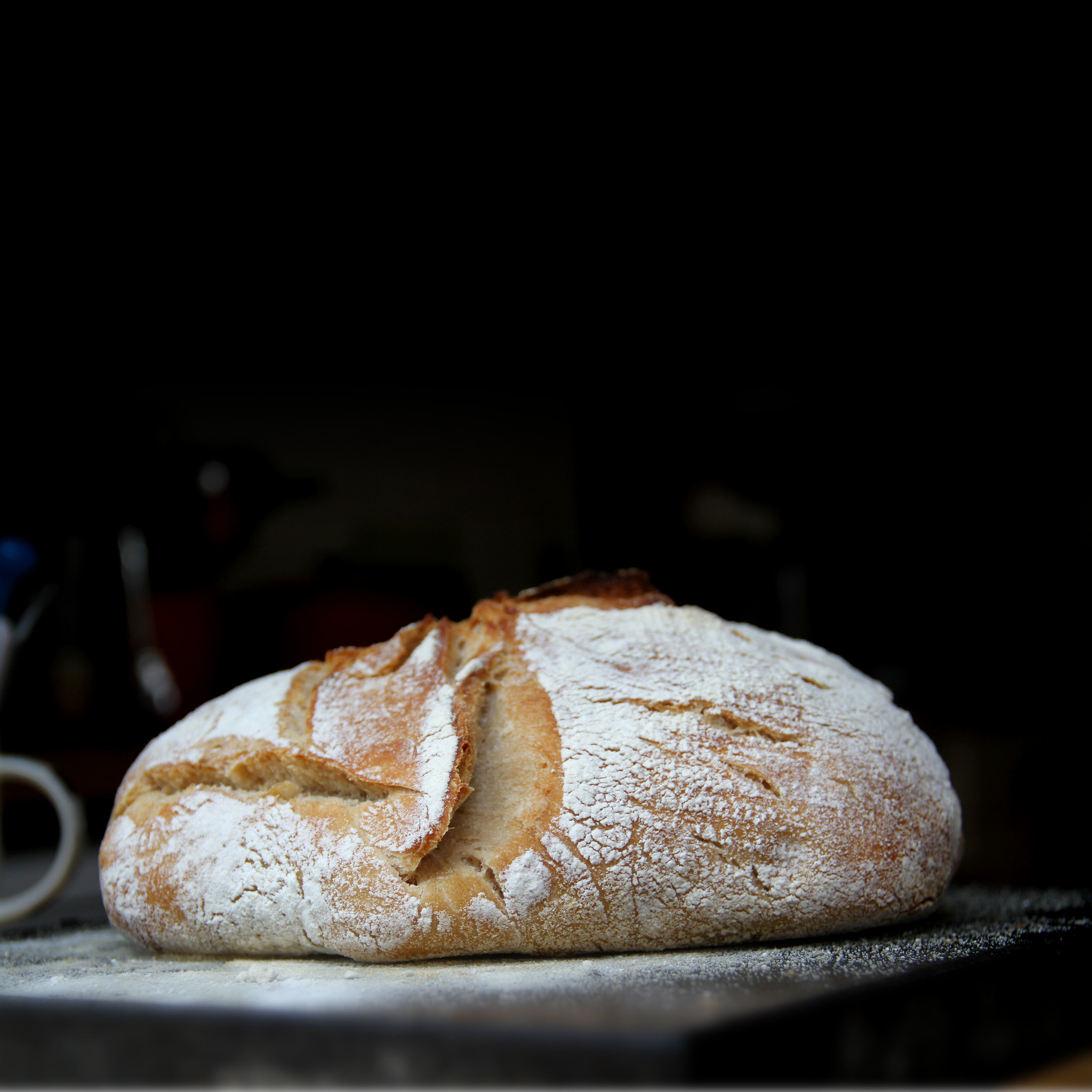 Generously dust with polenta and carefully lift onto one half of a VERY well floured tea towel. Fold over the other half of the tea towel to cover.

Set aside for an hour or two.

Place a large Le Creuset casserole (with lid), or similar, in your oven and turn it up to as hot as it will go.

Allow 20 minutes for the pan to get VERY hot.

Remove the pan from the oven (you might need oven gloves) and chuck in some polenta.

Quickly but carefully flop the dough into the pan, put on the lid and return to the oven for 30 minutes. 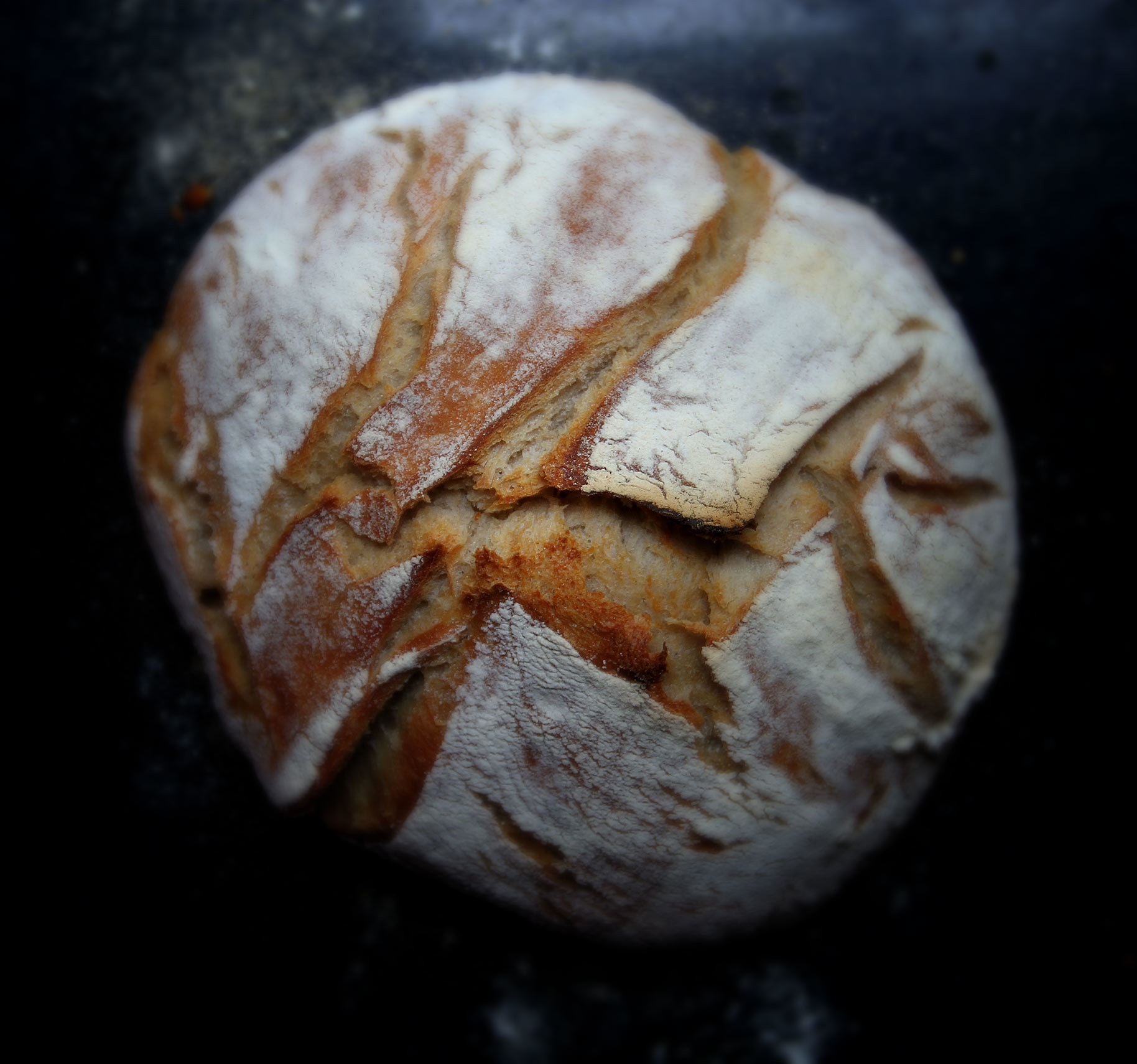 Remove the lid, turn down the oven a couple of gas marks (40 degrees C or so) and bake for about another 30 minutes. You want a good brown crust which is just beginning to (but not quite) burn on the rough edges.

Tip out onto a wire rack, pour yourself a drink and admire your handiwork.

Confused? Then watch this video by Jules Clancy.

Also, don’t forget to feed your starter with one cup of flour and one of water.

Verdict: Excellent the first time … perfect by the third time. Chewy inside, crusty outside. A seriously good loaf.

Drink: Go on, you deserve it.

Entertainment: In the 10 or so hours this takes to make we would probably visit the ducks three times, the playground twice and the pub once.