richard Leave a Comment on The Great British Bake Off, Mary Berry and Fake Cream

A belated congratulations to Joanne for deservedly winning the final of this years TGBBO and commiserations to Mary-Anne for being such a gracious loser. We would have been happy if either had won, so long as it wasn’t Yummy Mummy Holly (Ooh look, I seem to have already got a book deal!), with whom we took an instant dislike which, as the series progressed, bubbled over into profound hostility.

It was with Bake Off in mind that I bought this copy of Mary Berry’s ‘Cooking at Home’ from a local charity shop (Published in 1983 and ‘As seen on TV’). What drew my attention was a footnote at the end of the ‘Cooking with cream’ chapter headed ‘Home Made Cream’

‘Cream’ Mary explains ‘is very expensive, so I often make this one in the blender and nobody seems to notice’. She then goes on to describe how to make her fake cream by mixing together milk, butter and gelatine. Now I could be wrong, but I suspect if any of the contestants on TGBBO had slapped this stuff in the middle of a Victoria sponge and served it up to Paul ‘Silver fox’ Hollywood, he might have noticed the difference. 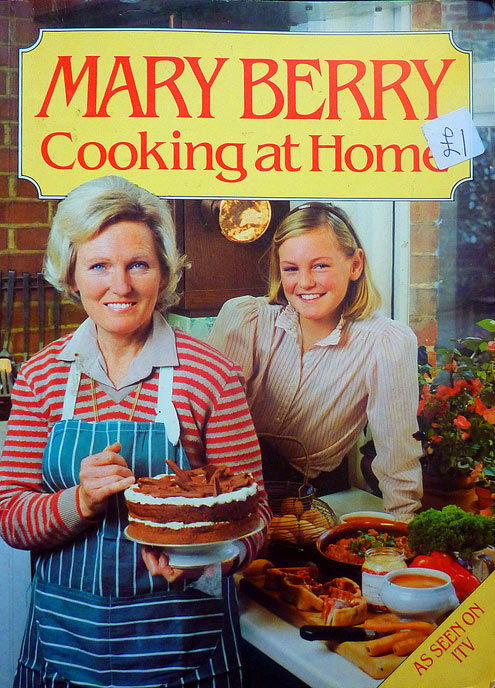